One of my favourite things about Halloween and Carnival is putting the costume together from things I already have, looking through second hand shops (thrift shops) and going the whole hog with the makeup. So most years my costumes involve something a bit different, you will never see me dressed in a sexy police costume or anything along those lines. Halloween is for scary costumes and scare is what I intend to do!

My Wicked Witch costume was actually for a friend’s costume birthday party. I used an old black dress of my Mum’s and found the top part with the flared arms and the lace up front in my local second hand shop. 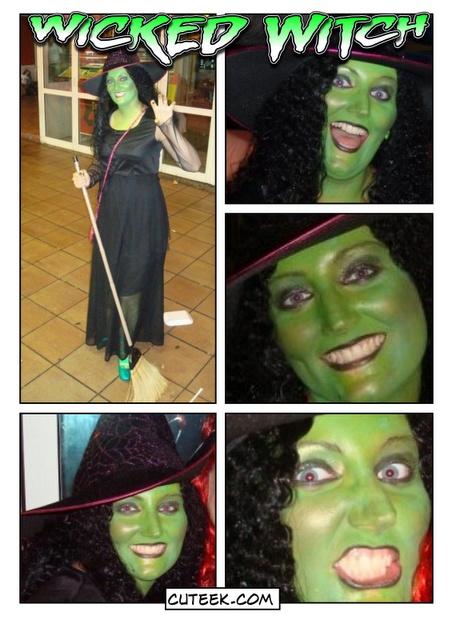 The neon fishnets I already had in my dress up hamper (yes this exists) and sparkly green shoes were also already in my possession. In fact I had the basics for a witch costume, but I really wanted to make an impact, so I decided to be Elphaba or The Wicked Witch as she is more commonly known from The Wizard of Oz.

This isn’t the tutorial that I used but it’s a very good one, from Broadway makeup artist Jimmy Cortez. He shows how to do important shading and highlighting, it’s not just a case of slapping on green paint you know!

For my green face paint I used a brand called Snazaroo

which is a very good water based, non toxic paint. I used green eyeshadow on top of it to set it, plus some bronze shadow for ‘blusher’.

I had so much fun and even my friends didn’t recognize me at first. I spent about 45 minutes on my makeup, but you could probably do it a lot quicker. It might be worth having a trial run before party night. Have fun!

Are you thinking about being the Wicked Witch for Halloween, Carnival or a costume party?