So this week especially I’ve been so frustrated wondering who A is in Pretty Little Liars. Keegan Allen who plays Toby just revealed some juicy secrets in his latest interview:

I do know who ‘[A]’ is and what I love about who it is is that everyone knows who it is … but it will be so shocking and surprising.

Everyone will freak out because it’s so clearly in every episode. When it’s finally revealed, you could literally go back to season 1 and knowing who it is, you can be like, ‘Oh, wow. Whoa. This has been here all along, and I never noticed it,’ which is, I think, brilliant.

I feel lately all clues are pointing to Aria being A. But, I’m starting to think otherwise. Yes I do believe Aria has a huge secret, like her time in Iceland. Remember in the pilot where she meets Ezra in the bar, he says he’s been to Reyjavik but she doesn’t offer any more into the conversation. Don’t you think if you had really been somewhere as impressive as Iceland you would have something more to say?

OK, so I’ve heard a few people talking about Aria having some kind of split personality disorder. There are tons of videos on youtube which highly suggest this too, some brilliant edits of her looking in mirrors and looking suspicious.

Taking Keegan’s suggestion, I went back to watch the pilot with the idea in mind that Aria might be A. Yes she looks highly suspicious, and the story starts out with the Montgomery family. I came to the conclusion that Aria’s Mum, Ella could quite possibly be A! In the first episode she is really pushing Aria to phone the girls and hands her her mobile.

This is the first text from A to Aria. It also says Message 1, almost as if she hasn’t had her phone for long and she just got it that same day? 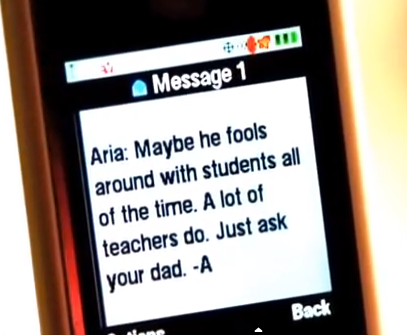 When Byron is clearly lying about his affair (which Aria knows about) and Ella gets suspicious, what if she hires a detective and sets up cameras? Maybe she thinks Aria knows something and so hides cameras in her room and in her dolls? After finding out about the affair, she gets so hooked on spying on the girls as paranoia takes over, she carries on tormenting the lies out of everyone. She was lied to by her husband and so everyone needs to learn a lesson about keeping secrets?

Apparently the only one of the Liars who doesn’t know A’s identity yet is Lucy Hale. Wouldn’t it make sense to make her the last to know if Ella is A? In the Pilot in the scene with Alison’s funeral, Aria’s phone goes and Hanna asks ‘Anyone we know?’ Aria says ‘No it’s just my Mum sending me a text.’ She doesn’t look too happy though. Why would Ella not go to the funeral?

Also when the PLLs are standing outside of the church they all receive a text at the same time:

I’m still here bitches, and I know everything!

I heard that Mona was A in the pilot, but what if Ella took over after that? I. Marlene King has said that once we find out A’s reasons for doing what they do, we will feel sorry for them. Could Ella be mentally ill? Ella isn’t in that many episodes but a one point she does get a teaching job in at Rosewood High. To keep a better eye on things? She could easily install micro cameras and spy equipment in lockers and bathrooms.

Who do you think is A?