I’ve been having tweeting a lot about the latest goings on in PLL. I have all these crazy Pretty Little Liars theories, so if you don’t want any possible spoilers you may want to skip this. 😉

So in the last episode Ali’s remains were taken to Rosewood mausoleum and the girls (well apart from Spencer) payed their respects (again). 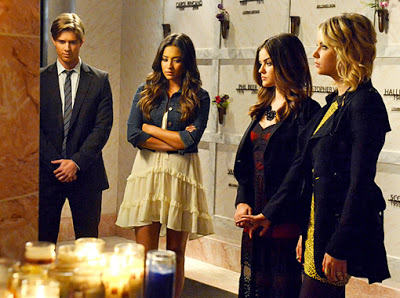 Theory 1:
All the close ups of the blackboards in the classrooms and anything with lettering on it, like Ali’s 2nd grave have clues on them, that aren’t as obvious as we’d like. I remember in the first season when Mr Fitz started teaching he had a lot of ‘A’ letters behind him on the board.

Theory 2:
Any gifts, plants or flowers are bugged. Mona gave Dr Sullivan a pink orchid to place specifically on the window, as she smiled sickly at her. I’m pretty sure the orchid is bugged in some way. (In Dexter season 7, Dexter’s GF Hannah gives him a pink orchid and tells him to place it on his desk at home, I also found that suspicious)

I think all the girls have something in their house that is tracking them, hence all the messages at the right times from A.

Theory 3:
Ali is alive. Ali has a twin sister? The one in the red coat is Ali’s twin, she wanted Ali dead because she took the life she was supposed to have? Maybe the DiLaurentis family adopted one twin and the other went to a bad home, making her have this anger and revenge? Or one twin was very mentally sick and they sent her to a hospital and she escaped wanting to take Ali’s life over?

Theory 4:
Ages ago Melissa faked her pregnancy and went to where was it some far away hospital? I think she did it so the pregnant twin (Ali 1 or Ali 2) could have healthcare cover and maybe she gave the baby up for adoption and Garret was the Father? Which would make ‘The Beach Hottie’ Garret and he started to talk, that’s why he was killed at Halloween? Or was Fitz the Father? Hmmm!

Theory 5:
The parents are more involved than we think.

Theory 6:
Spencer is going to go so far off the handle, that she is going to start her own game, sending texts and terrorizing Mona.

Do you follow Pretty Little Liars? What do you think of my theories so far?