I’m not someone you would call handy in the garden. I used to have this beautiful bright pink Bougainvillea up on my roof garden, in fact it was supposed to be for a place to keep the memory of my sister alive who is probably now looking down from heaven thinking ‘What the hell did you do to my memorial plant?’ 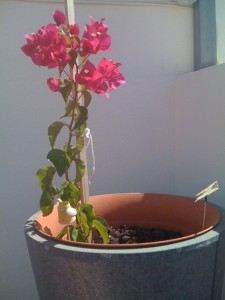 Pink was her favourite colour so it was picked out from the garden centre specifically.

It flourished and attracted a colony of ants and something else which like to nibble on the leaves now and again.

After a couple of seasons it started to die, I knew it only had a few months left in it. In the meantime I decided to stay away from anything that was flowery and stick to the rubber plants, cacti and the like.

I purchased an Aloe Vera plant for my Dad for his birthday in a tiny little pot, it had 3 leaves when I bought it, but after a few years it grew and grew. We chopped off leaves, made face masks, used it on sunburn and it still grew.

Then my Mum and Dad moved away and so I had the full responsibility of not only the little Aloe Vera, but also their other plants.

After the Aloe Vera was replanted on my roof garden it thrived and has even popped out ‘babies’ around the base of the leaves.

It’s much bigger now as you will see in the next photo, it even has these weird alien stalks growing from it each Spring with what I like to call mini bananas flowering from it.

Aside from my cacti and easy to maintain plants on my roof garden, I also have some indoor plants. It started with a few bamboo ‘twisties’ as I like to call them and then one day I wondered how difficult/easy it would be to grow a avocado tree/plant. I thought it was just a case of throwing the seed from the middle of the avocado into some soil and watering daily. How wrong was I?

I have already written a couple of blog posts about my ‘Avocado Farm’ as I like to call it, which you can read here.

So after discovering it wasn’t as easy as Jack and his beanstalk, I did a bit of research (not enough) and found that you have to stick cocktail sticks into the sides of the avocado seed (looks very Tim Burtonesque if you ask me) and put it in a small glass of water. After some time the shoot ‘should’ sprout from the bottom of the seed into the water.

My first attempt was with Alec the avocado and he started sprouting from the top (I’d planted him in the water upside down oops). 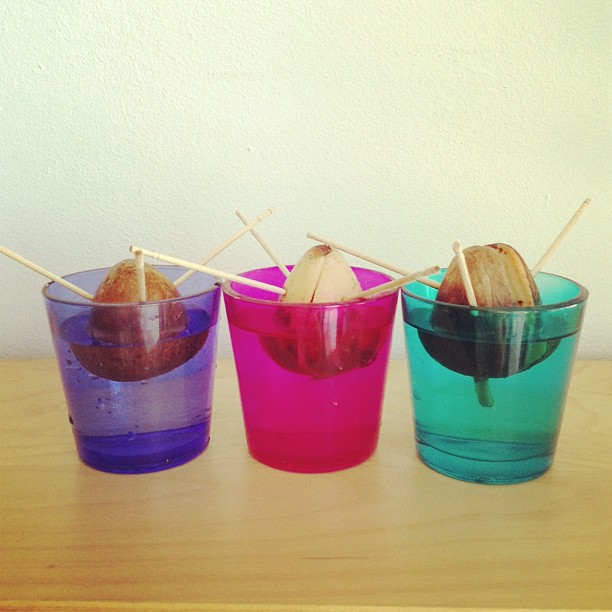 The 2nd avocado Alexa was already sprouting after eating and so I thought it would make it easier to grow (wrong) and the 3rd Asterix had no shoots but started sprouting a week or so ago and each day I swear it’s trying to jump out of it’s glass!

It’s getting like Little Shop of Horrors in my office. I’d better go the plants are calling! Do you have a garden? Is it successful?