Greetings fellow Quahogians, I have some out of this world news. FGTQFS have just announced on their FB page that on March 19th Family Guy the Quest for Stuff Star Trek event began on March 19th and ends on April 30th! I’m sure I’m not the only one, but I do hope they do some nice tribute to Leonard Nimoy at some point. 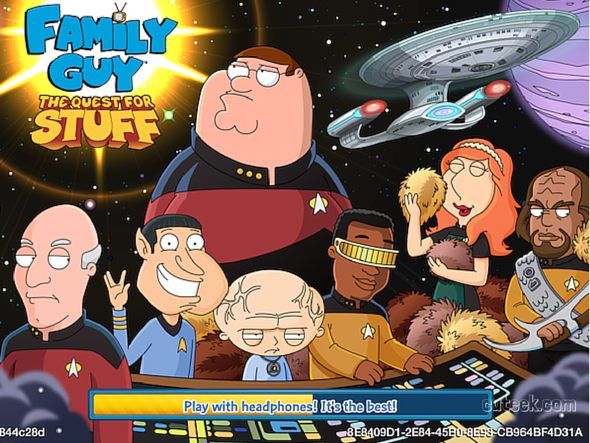 Commander Riker has crashed his shuttlecraft into Quahog (thankfully not into any of my carefully placed buildings) and Peter must help him repair it. Our quest starts off with an easy-ish task of collecting beard trimmers, tricorders and the event currency dilithium. (I’m finding the last 30 dilithium difficult to obtain due to slow tribble drop rate) 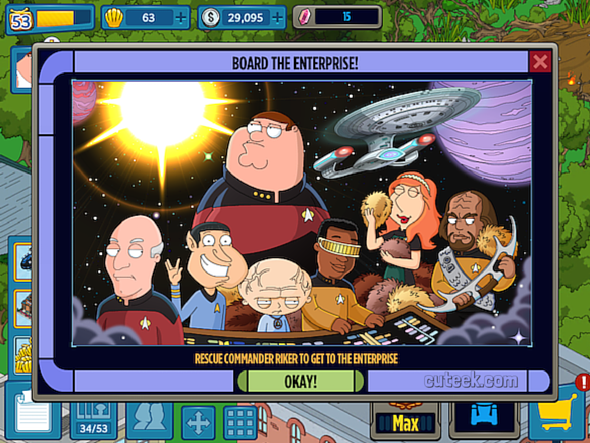 Tribbles look like little fluffy Yorkshire Terriers without faces and I want one! You tap on one and they multiply like Gremlins after midnight, so get tapping quickly to collect pink dilithium.

Once you have unlocked Riker, you can then visit the Enterprise. The music is wonderful and I’m sure Seth MacFarlane had a lot of involvement in this part of the game development.

Collect all of the Tribbles for more Dilithium and Captain’s Logs which you will need to unlock Starfleet Peter. From the ship you can then see the crew who are all trapped in some sort of conundrum, tapping on them will tell you their requirements.

Where no Griffin has gone before, An Officer and an Idiot.

+ Clear a piece of land for any Star Trek decor and buildings so your new items aren’t all over the place.
+ Don’t spend your dilithium too soon, collect 175 to start with so you can unlock Riker.

Which Star Trek characters are you hoping to see?