Lately I’m really into the time travel genre, (thanks Lost) so when I found the About Time

film on Yomvi (Spain’s answer to Netflix) last night I just had to watch. 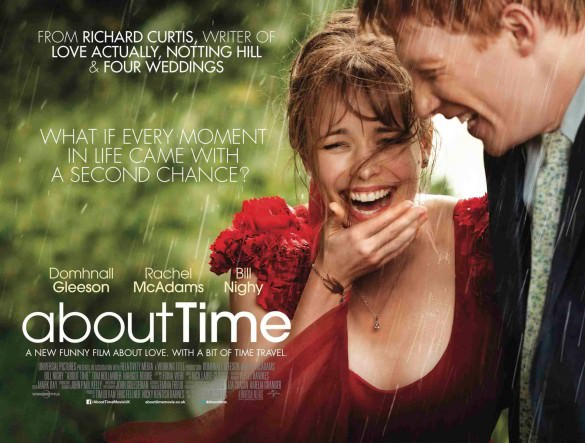 I don’t usually like watching English films, I’m a big weirdo I know. The description pulled me in though, set in London and Cornwall and starring Rachel McAdams.

Ok you can tell I’ve never watched Harry Potter, IMDB informs me that actor Domhnall Gleeson who plays Tim, also plays Bill Weasley in HP. He is such a charming actor!

“I always knew we were a fairly odd family. First there was me. Too tall, too skinny, too orange.” – Tim

Tim is a young man living quite a privileged life in Cornwall, with his parents, sister KitKat and his Uncle. All Tim wants to do is meet a girl. On his 21st Birthday, his life completely changes when his Dad sits him down for ‘the talk’.

The time travel talk that is.

All the men in the family have the ability to time travel! Tim is a nice lad so instead of manipulating the lottery or using his power to do bad things, he uses it to meet the girl of his dreams.

I really enjoyed this film, it’s still making me think 12 hours later. It’s interesting to see how the variables can cause a butterfly effect, although I do wonder about a few things such as the wear and tear on the body. If you were to relive every day twice, wouldn’t your body age twice as fast?

Did you like The Time Traveller’s Wife, The Notebook and the TV series Goodnight Sweetheart? If so, you will probably really enjoy About Time.

Let me know in the comments below if you have seen this film and any recommendations of other time travel films.